LATAM set out on a journey of digital transformation focused on creating clean, modern aesthetics and a customer-centric user experience on their direct channels, both desktop and mobile. The airline tasked a team of engineers, web developers, UX designers, and marketing strategists to focus on building a new website and mobile app leveraging personalized offers, seamless navigation, and Amazon-like offer building. The goal? To become an airline in your pocket.

Through LATAM’s partnership with ATPCO, their direct channel integration went live in a matter of four months, even amidst the pandemic. All three types of Routehappy Content – UPAs, Amenities, and UTAs – played an integral role in making the vision a reality and creating a better experience for LATAM’s users. 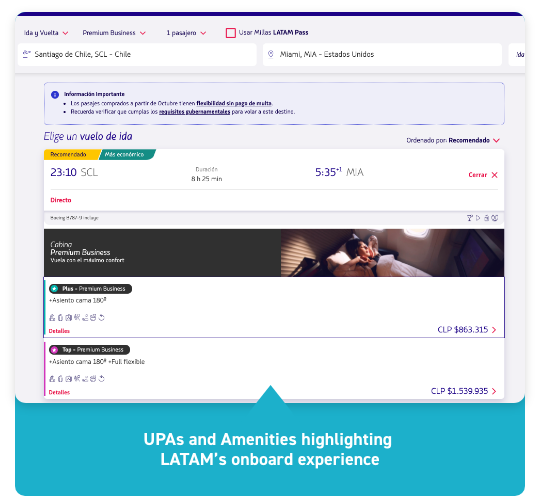 At the beginning of 2020, LATAM wanted to enhance their margins by driving more flight shoppers to their direct channel—and making sure they came back. This meant ensuring that every step of the passenger experience was positive and efficient, with clearer, actionable information, fewer clicks to purchase, and reduced transaction times.

Focusing on a direct channel transformation was a strategic decision that would allow them to stay more closely connected to the user experience and cater to the needs of their customer base. The airline wanted to have everything travelers would need consolidated in one place.

The new website and booking app would need to include a full-service experience with the necessary automation, flexibility, personalization, data, and safety information needed to reassure travelers and get people flying again in an age of uncertainty.

Since the pandemic, being able to provide clear and targeted information has become even more critical in reassuring customers and getting them to purchase.

The airline began a proof of concept that would lead them to developing a revolutionary interface in a time when few other airlines were launching new websites.&nbsp

Rather than the traditional airline tech approach, LATAM wanted to use best-in-class development techniques. They set up a new business unit in-house and opted for an agile methodology that allowed them to rebuild from scratch and simplify the business model.

LATAM worked with ATPCO on their direct channel integration of all three types of Routehappy Content, which would allow LATAM’s users to have visual information that would give them a glimpse of what to expect on their specific flight experience, rather than generic aspects of a flight. “As we planned to roll out the new site, we had started with Amenities and UPAs but realized we needed the UTA data. There was nowhere else to turn for the baggage information except for ATPCO,” said Jorge Andrés Sierra Jurado, Digital Transformation Manager at LATAM. “We quickly realized ATPCO would be a critical part of our transformation.”

LATAM rolled out the new website first with domestic Ecuador, eventually covering Chile, and intercontinental travel, with a focus on cabin upsell and search results. The agile nature of the partnership between LATAM and ATPCO allowed the airline to quickly act, figure out the roadmap, and implement the new content all within four months.

“LATAM has raised the bar in terms of how to do airline technology development,” said Zachary Wynne, Airline Solutions Manager at ATPCO. “We worked collaboratively with LATAM across all departments from network planning, to marketing, to distribution, all while maintaining a clear focus on a clean, flyer-centric product delivery.” 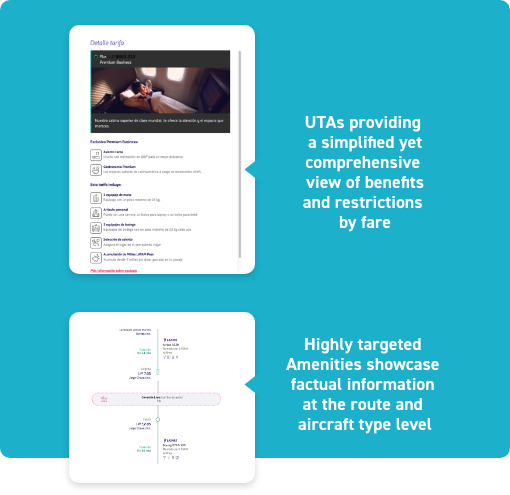 It was important for us to be able to seamlessly fit retailing content representing our products into the new digital experience—Routehappy Rich Content gave us the flexibility we needed with a variety of formats. 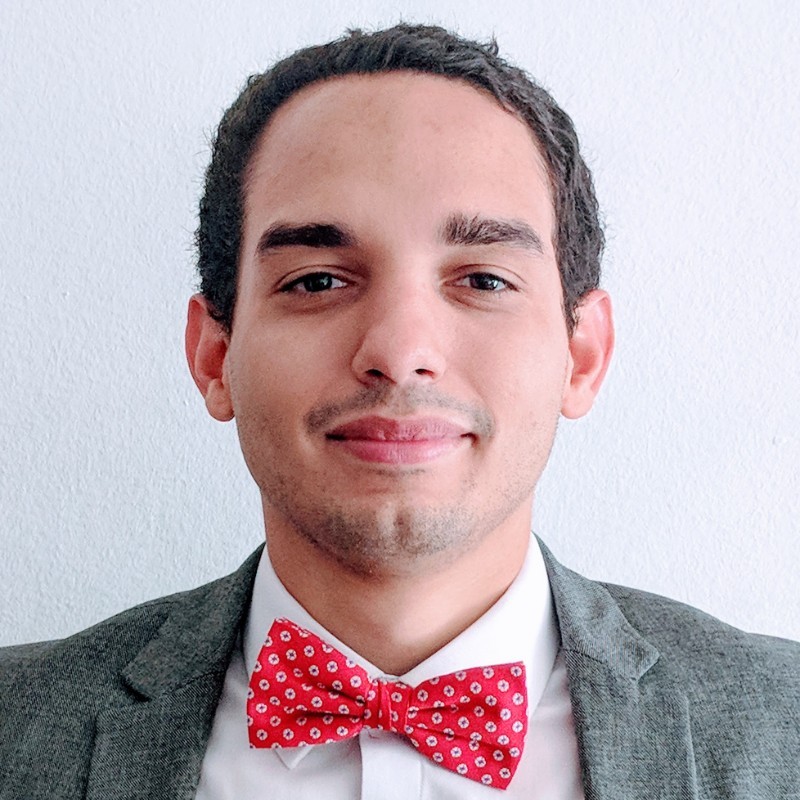 Jorge shared that his team was not surprised to see that the ability for shoppers to visualize their future travel experience would positively affect conversions and stimulate traveler purchases of additional services. As the next step, his team is experimenting with different UPA types and displaying Routehappy Content at different stages of flight shopping and the post-booking customer journey, so they can continue to improve customer experience and engagement.

Within weeks of launch, LATAM observed a double-digit percent increase in Net Promoter Score (NPS). The increased NPS aligns to benefits observed by other airlines and channels as critical details about the flight shopping experience are made accessible to flight shoppers through this integration.

“ATPCO provided the support we needed in undergoing our digital transformation. Because their content and data is the industry standard, we know we’re able to scale for the future and they’ll facilitate more complex transformations,” said Jorge. Going forward, LATAM and ATPCO will be working together on ancillaries to create a richer merchandising experience on top of the flight search results, and NDC initiatives.

The value of industry partnerships

ATPCO exists to deliver industry solutions that help customers and travelers worldwide. Our Retailing and Integrations teams’ goal is to make integrations into flight shopping experiences such as LATAM’s as simple and straightforward as possible by providing full customer support, project management, technical capabilities, powerful data, strategic retailing and creative services, and more.

If your business seeks to transform its user experience with meaningful data and rich content, contact our Global Sales team today. 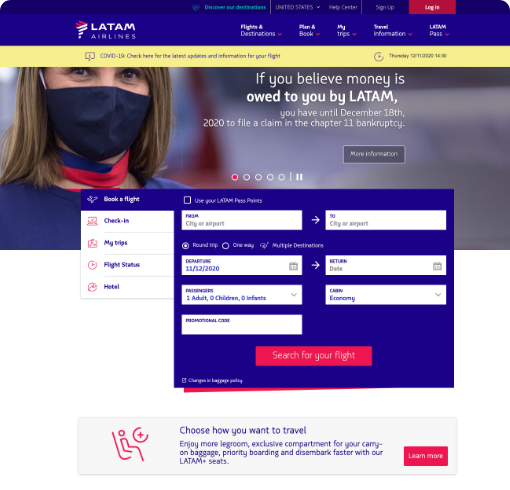