Airline contract management has traditionally been a complex process requiring subject matter expertise that has become difficult to come by. For United Airlines, long lead times associated with getting negotiated fares in the market have resulted in strained customer relationships and missed revenue opportunities. Even before the pandemic, the airline had been exploring options to reduce the time to market for its negotiated fares.

At Elevate 2021, United’s VP of Sales Strategy & Effectiveness, Glenn Hollister, sat down (virtually) with ATPCO’s Integrations Manager, Swati Sharma, to discuss how the pandemic created the perfect opportunity to modernize the airline’s contract management process with Express Contracts, built in partnership with Volaro.

Get from signed airline contract to filed fare faster

According to Glenn, “the thing that initially got us interested in Express Contracts was the idea of really drastically reducing the time from when a contract is signed to when the fare is filed.”  Their salespeople found themselves constantly bogged down by corporate customer inquiries regarding whether crucial, business-impacting negotiated fares were ready to book. Hollister and the sales team wanted the ability to confidently tell customers when fares would be available in the market.

“Unfortunately, through the pandemic, like all other parts of our airline, the fare filing team got a little smaller,” said Glenn. The airline found itself trying to balance the need for subject matter expertise in fare filing with responsiveness to its customers. “The pandemic actually gave us a window of opportunity where we weren't doing a lot of corporate fare filing. Most of our corporations, when their deals came up, just extended the existing deal,” Glenn said. The simplicity associated with this type of fare filing, coupled with a decrease in the volume of new contracts, freed up resources to address projects that long had been put on the back burner.

Start small: Automate a portion of your airline negotiated programs

As a full-service airline with a variety of joint partnerships, the breadth and complexity of United’s contract management was too extensive to immediately implement Express Contacts across all processes. Instead, the airline decided to start with a portion of their corporate contracts. They started with “a somewhat smaller area, at least on a filing-by-filing basis,” said Glenn, choosing the area where they found the most pressing need for a faster time to market. 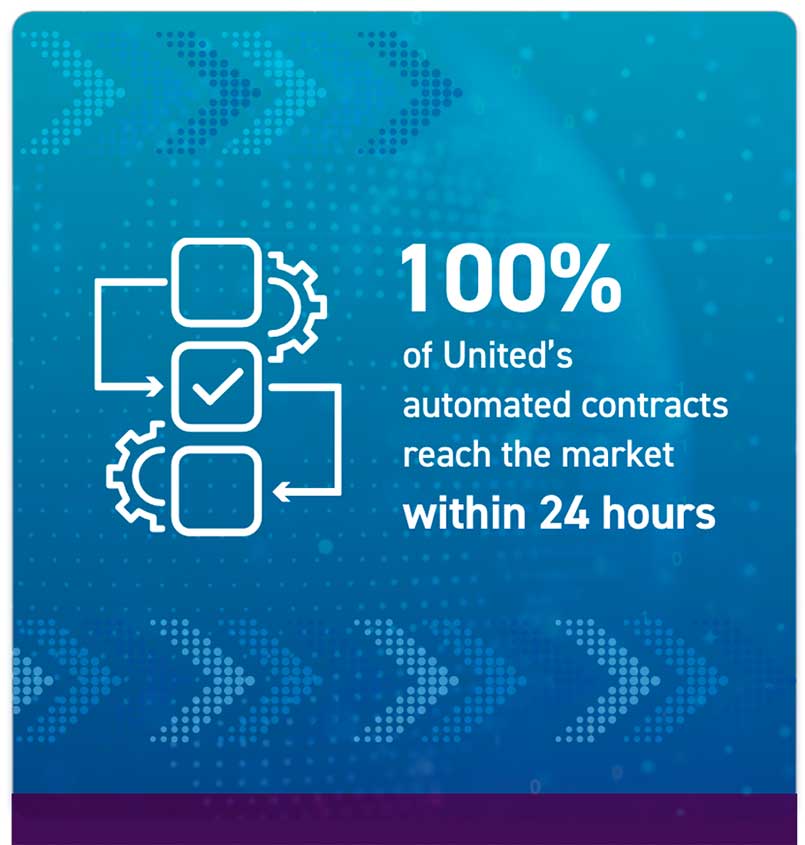 Automation turns your airline contracts to bookable fares in a day

By implementing Express Contracts into its contract management process, United alleviated the workload for fare filers, turning their focus and expertise to the complex agreements. The airline drastically reduced time to market for its corporate fares, with 100% of their automated contracts reaching the market within 24 hours.

Express Contracts gave United’s sales team the confidence to tell its customers when their fares would be ready to book – strengthening the relationships with its existing customers and bolstering United’s value proposition.

United optimized the fare filing process by automating the straightforward corporate contracts – a process that now allows the fare filing team to focus its expertise on the more robust agreements. By starting small and investing resources in a modern solution during the pandemic, United alleviated legacy pain points and positioned itself to realize increased revenue as corporate travel begins to resume.

Express Contracts: The tool you don't know you need

How can Express Contracts help your business?